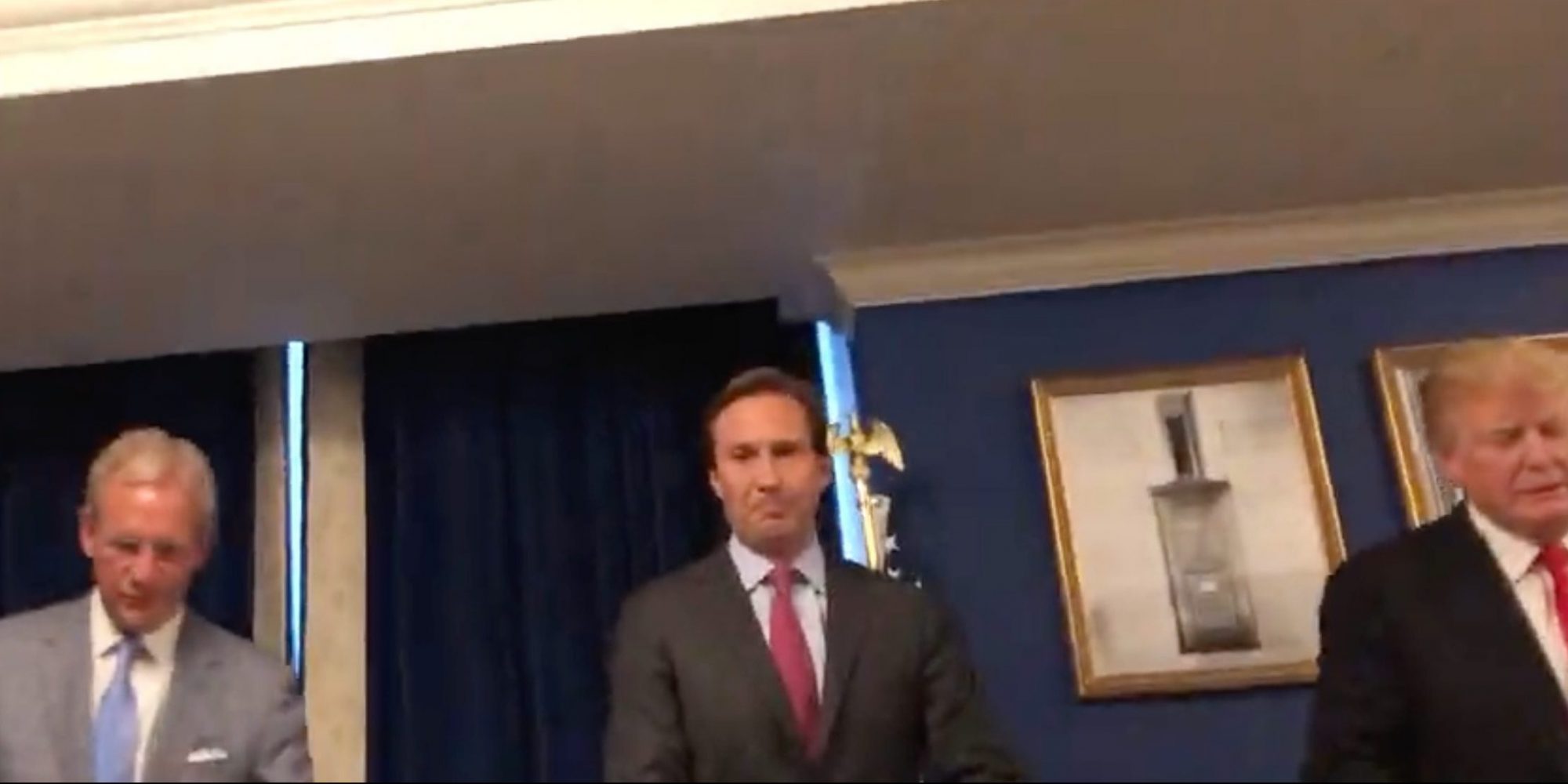 An 83 minute-long video was released today with a phone recording made by Lev Parnas in April 2018 of a dinner attended by Donald Trump.

The video touches on many subjects, many of which been covered elsewhere.  But here on Electrek, we are particularly interested in the part starting around minute 57, where there is approximately 15 minutes worth of discussion about electric vehicles, alternative fuels, shipping, and autonomous driving.

And almost all of it is nonsense.

The video includes several unidentified voices, and one voice which is quite clearly Mr. Trump’s.  He also appears in the beginning of the video.

The discussion begins with the voice of a man who is involved in a business compressing natural gas.  He starts heavily into a pitch to get CNG vehicles on the road.  He claims that CNG vehicles would help manufacturers meet emissions standards, which is something they’re currently having difficulty doing.

Trump responds that “we’re gonna lower that,” and the original voice states “absolutely, you’ve done a great job on that.”

This is referring to Mr Trump’s current attempt to roll back EPA mileage standards put in place under President Obama.  We have written about how this move will kill Americans and cost them money based on the EPA’s own analysis of the plan.  The case is currently being opposed on several levels, with several states and businesses opposing the rollback.

The CNG advocate then states that there is an opportunity for CNG vehicles to be on par with electric cars, but “we don’t want any tax credit, all we want is…”

Unfortunately, we don’t get to hear exactly what he wants, because that’s when the discussion launches into all sorts of myths about electric cars – though mostly from Mr Trump’s impromptu advisers, rather than from Trump himself.

Mr Trump asks “how are electric cars doing now?” and his compatriots stumble over each other to claim that electric vehicles, which doubled over the course of the year prior to the conversation, “not [doing] good.”

When Mr Trump brings up Tesla as a possible counterexample, another voice states “no Tesla’s broke, 100%” and someone interjects “he’s shutting down the line of the most popular car.”

This may refer to the few days that Tesla shut down the Model 3 line in April 2018 in order to improve automation.  At the time, Tesla was producing around 2,000 Model 3s per week.  Last quarter Tesla produced almost four times that many Model 3s per week, so indeed the line was not actually “shut down” in any permanent manner and Tesla’s “most popular car” is significantly more popular than it was even then.

That voice then launches into a soliloquy filled with roughly zero accurate information about the situation at hand:

“They cant produce them, he’s already, the auto companies have caught up to him, he’s never generated anywhere close to positive cash flow, he’s subsidized by 25,000 per vehicle.  It’s over.  The other thing people forget about it it’s great to have an electric vehicle but you gotta plug it in and get a charge somewhere.  The carbon footprint of this phone is the same as a refrigerator running, you need to generate the power.  And generating it with wind and solar, wind and solar only generate 3.5% of our power usage today, you would take 50 years to get up to 5% at the rate we’re growing.  It is still fossil fuels generating power and you have to have nuclear, you have to have oil and gas, and you have to have coal.”

For a quick breakdown of the things wrong with this soliloquy, see below:

The discussion continues from here, with more focus on Tesla.  Mr Trump asks why the stock price is so high, and his compatriots state it’s because “he’s a great salesman,” referring to Tesla CEO Elon Musk.  But the soliloquizer states that that “that stock is history, he’s done.”  Tesla stock is currently 80-90% higher than it was in April 2018.

After this side discussion of Tesla and Musk, the CNG-advocate gets back to work trying to lobby for his pet fuel.  He explains that the US is “the Saudi Arabia” of natural gas, and that we should focus on this energy source.  “It’s local, it’s domestic, it’s cheap, it’s plentiful, it’s clean,” he says.  There are some ways to make clean CNG via biofuels, but given his statement about the US being “the Saudi Arabia” of natural gas, he is likely talking about fossil, non-biofuel natural gas from fracking operations which have boomed in the US recently.

The only reason that CNG isn’t being used in transportation, according to him, is “because the auto manufacturers aren’t incentivized” (but wait, wasn’t he not “asking for any tax credit”? what incentive does he want, then?) and “[CNG technology development] shut off because everyone went to battery.”  But the voices on the tape still maintain that electric vehicles are unpopular, despite manufacturers and the public changing focus to EVs over other types of vehicles.

They also state that “hybrids are definitely more popular” than electric cars.  But for the past few years a trend has been happening where pure electric sales have been rising and PHEV/hybrid sales have been dropping.  This stands to continue in 2020, with the global auto industry facing decline and EV sales being the strongest rising sector within the auto industry.

There are precious few points of sanity injected into the discussion at any point, and notably two of them come from people who actually have experience with what they’re talking about.

At one point, there’s discussion about the aluminum frame of the Ford F-150.  Some voices state that this was not a good investment for Ford.

But the one person in the room who actually has an F-150 says that he very much likes his aluminum F-150 compared to other trucks he’s had in the past.  “It’s so much lighter, it drives like a high performance vehicle,” he says.

This happens again later in the conversation, where a man who owns a trucking company which ships mail for the US Postal Service chimes in and tells the CNG-advocate that, in his opinion, CNG is kind of bad.  He states that their CNG trucks have “a lot less power, a lot less mpg, and if you don’t get the 50 cent tax credit it’s not feasible.”

This is a little inaccurate since CNG is not sold in gallons, but in “gasoline gallon equivalents (GGE),” so this is probably what he is referring to with “mpg.”  A CNG vehicle ought to get the same energy from one GGE as it would from one gallon of gasoline, since that’s the point of the measurement.

What stands out here in that statement is that the trucking company owner does think that CNG is only feasible because of a 50 cent per gallon tax credit.  Earlier in this conversation, it was asserted that Tesla’s electric vehicles could not exist without subsidy, even though currently in 2020 they get no federal subsidy in the US and yet are still selling to consumers as we speak.  But now in the conversation, a trucking company owner is asserting that CNG trucks are the ones that are not feasible without subsidies.

The trucking company owner goes on to talk about truck drivers, and float the idea that an autonomous drive lane should be added to highways for driverless long haul trucking.  And one voice pipes up with some final inaccurate fearmongering before the conversation moved on to other topics: “I’m scared of those, you see those cars driving by themselves.”  This doesn’t actually happen, as semi-autonomous vehicles on US roads (outside of small testing areas) currently need a driver behind the wheel, and that was even more true in 2018 before Waymo started their geofenced driverless program.

Watch the video here (it should load at around 57 minutes in, where the electric car comments begin), and feel free to post any other juicy details you hear in the comments below: